The Village Museum will be Re Opening Saturday, September 19th from 1pm to 4pm 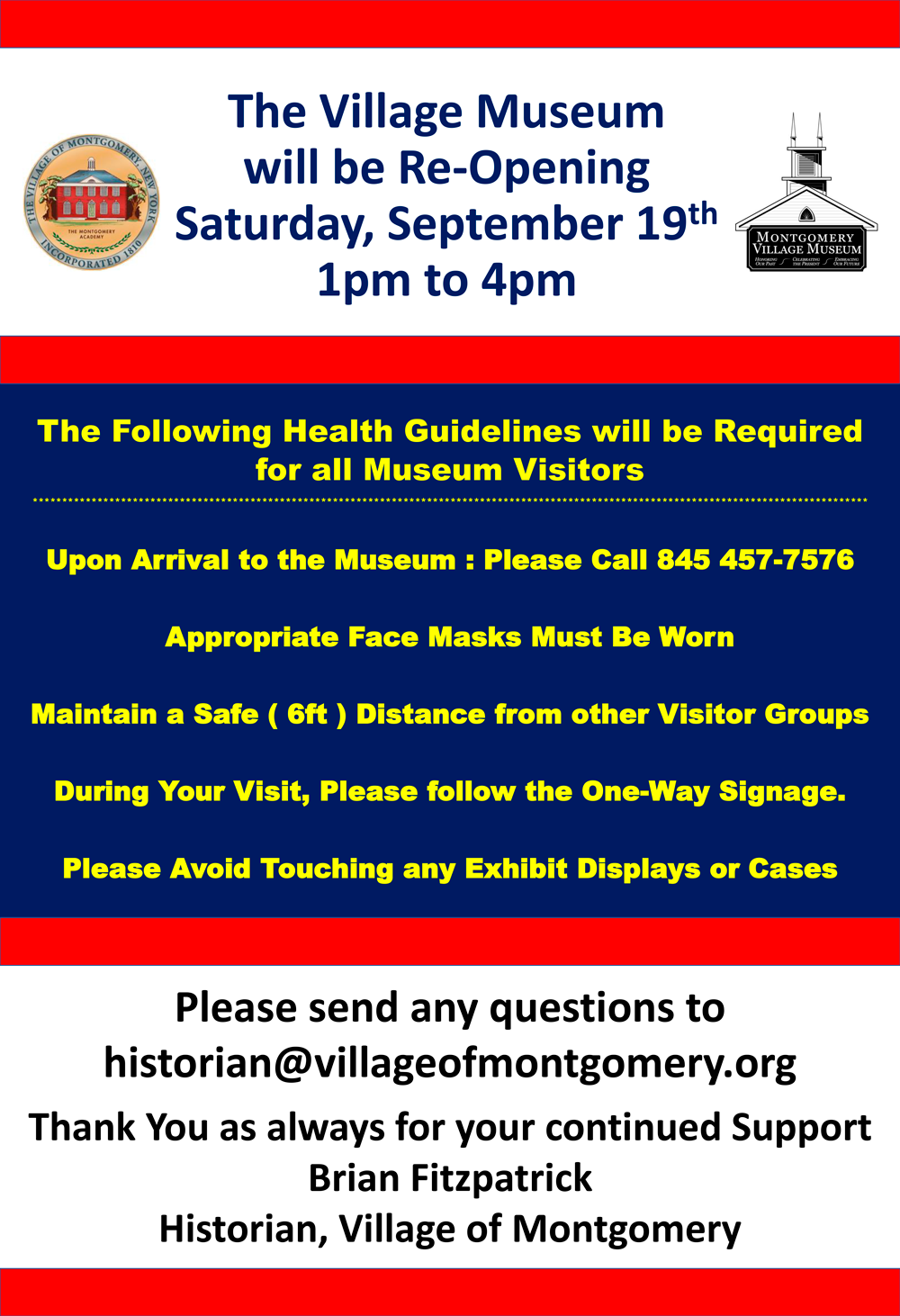 The Following Health Guidelines will be Required for all Museum Visitors
Please send any questions to historian@villageofmontgomery.org
Thank You as always for your continued support

Testing of our water supply system is done to be sure the drinking water that the Village of Montgomery delivers to your home or business remains safe.  The Department of Public Works will be flushing hydrants from April 11th – April 22nd  2016.  Again, you will experience some brown water during this period.  When the brown water occurs, run your water until it clears (usually about 5 minutes).

In the coming year, the Village will be installing a green sand filter system at our Holt Well location to eliminate the manganese problem(see attached table), with an estimated cost of about $500,000. Also this year, the Village will be replacing the water main on Clinton Street between Union Street and Wallkill Avenue. This will be done using a Community Development Block Grant of $100,000. Replacing this water main is being done to increase the available volume of water for fire protection and to update the aging infrastructure.

As mentioned before, our water is derived from six drilled wells.  The source water assessment has rated these wells as having a medium to high susceptibility to microbials, nitrates, industrial solvents, and other industrial contaminants.  These ratings are due primarily to the close proximity of a SPDES permitted discharge facility (industrial/commercial facilities that discharge wastewater into the environment and are regulated by the state and/federal government), the low-level residential activity and the pasture that is located in the assessment area.  In addition, the wells draw from fractured bedrock and various aquifers and the overlying soils may not provide adequate protection from potential contamination.  While the source water assessment rates our wells as being susceptible to microbials, please note that our water is disinfected to ensure that the finished water delivered into your home meets New York State’s drinking water standards for microbial contamination.  A copy of the assessment, including a map of the assessment area, can be obtained by contacting us, as noted in this report.

To comply with State and Federal regulations, the Village of Montgomery will be annually issuing a report describing the quality of your drinking water.  The purpose of this report is to raise your understanding of drinking water and awareness of the need to protect our drinking water sources.  Last year, your tap water met all state drinking water health standards.  This report provides an overview of last year’s water quality. Included are details about where your water comes from, what it contains, and how it compares to State standards.

If you have any questions about this report or concerning your drinking water, please contact  Department of  Public Works Superintendent Ralph Nelson at 457?5321. We want you to be informed about your drinking water.  If you want to learn more, please attend any of our regularly scheduled Village Board meetings. The meetings are held the 1st and 3rd Tuesday of each month at 133 Clinton St., Montgomery, NY.

Where does our water come from?
In general, the sources of drinking water (both tap water and bottled water) include rivers, lakes, streams, ponds, reservoirs, springs, and wells.  As water travels over the surface of the land or through the ground, it dissolves naturally?occurring minerals and can pick up substances resulting from the presence of animals or from human activities.  Contaminants that may be present in source water include: microbial contaminants; inorganic contaminants; pesticides and herbicides; organic chemical contaminants; and radioactive contaminants.  In order to ensure that tap water is safe to drink, the State and the EPA prescribe regulations which limit the amount of certain contaminants in water provided by public water systems.  The State Health Department's and the FDA's regulations establish limits for contaminants in bottled water which must provide the same protection for public health.

It should be noted that all drinking water, including bottled drinking water, may be reasonably expected to contain at least small amounts of some contaminants.  The presence of contaminants does not necessarily indicate that water poses a health risk.  More information about contaminants and potential health effects can be obtained by calling the EPA's Safe Drinking Water Hotline (800?426?4791) or the Orange County Health Department at 291?2331.

Some people may be more vulnerable to disease causing microorganisms or pathogens in drinking water than the general population.  Immune-compromised persons, such as persons with cancer undergoing chemotherapy, persons who have undergone organ transplants, people with HIV/AIDS or other immune system disorders, some elderly, and infants can be particularly at risk from infections.  These people should seek advice from their health care provider about their drinking water.  EPA/CDC guidelines on appropriate means to lessen the risk of infection by Cryptosporidium, Giardia and other microbial pathogens are available from the Safe Drinking Water Hotline (800-426-4791).

The level presented represents the 90th percentile of the twenty sites tested.  A percentile is a value on a scale of 100 that indicates the percent of a distribution that is equal to or below it.  The 90th; percentile is equal to or greater than 90% of the lead values detected at your water system.  In this case, twenty samples were collected at your water system and the 90th percentile value was of the third highest sample taken which was 3.2 ug/l. The action level for lead was not exceeded at any of the sites tested.

Maximum Residual Disinfectant Level Goal (MRDLG): The level of a drinking water disinfectant below which there is no known or expected risk. MRDLGs do not reflect the benefits of the use of disinfectants to control microbial contamination.

Maximum Contaminant Level (MCL): The highest level of a contaminant that is allowed in drinking water.  MCLs are set as close to the MCLGs as feasible.

Maximum Contaminant Level Goal (MCLG): The level of a contaminant in drinking water below which there is no known or expected risk to health.  MCLGs allow for a margin of safety.

Picocuries per liter (pCi/L): A measure of the radioactivity in water.


Note 2: The Food and Nutrition Board of the National Research Council determined an estimated safe and adequete daily dietary intake of manganese to be 2,000-5,000 micrograms for adults. However, many peoples diets lead them to consume even higher amounts of manganese, especially those who consume high amounts of vegetables or are vegetarian. The infant population is of greatest concern.  It would be better if the drinking water were not used to make infant formula since it already contains iron and manganese. Excess manganese produces a brownish color in laundered goods and impairs the taste of tea, coffee, and other beverages. Concentrations may cause a dark brown or black stain on porcelain plumbing fixtures. As with iron, manganese may form a coating on distribution pipes. These may slough off, causing brown blotches on laundered clothing or black particles in the water.